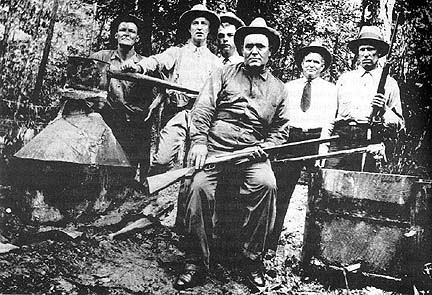 1927 Photo showing law officers in a raid on moonshiners

Hot Springs has a sordid history of gambling and gangsters, but little is mentioned about the liquid fuel that fed the "party spirit" during those good ole days. In spite of efforts of local police, Garland County was a hotbed for illegal spirits – moonshine.

LIQUOR VIOLATIONS CONSTITUTE MAJORITY – Out of a total of 90 cases before U.S. commissioner Roy Ermy, 81 are for prohibition violations. (July 1915)

GREENWOOD, SILENT CITY OF DEAD, INVADED BY MOONSHINE OPERATOR – Federal enforcement officers discovered something about Greenwood Cemetery - that spirits were being brewed within that sacred portal. (December 1920)

CASE AGAINST FORMER SHERIFF IS DISMISSED – Charges against Hubert Houpt were dismissed even though authorities found a still near his home. The former lawman admitted knowledge of the still, but stated he ordered the operators to move it from the proximity of his home. He did not report the matter to the officers, fearing the safety of his property and him might be endangered. (right… a sheriff that is scared, and fails to cooperate with the law?) (December 1922)

AL’S PLANS TO TOTE LIQUOR DON’T PAN OUT – Al Clampett, who owns a garage on Benton Street, had an ingenious idea. One of his Ford cars had a "combination" tank, one-half for gas and the other half for liquor. (December 1925)

HOT SPRINGS SUPPLIES SHREVEPORT WITH BOOZE – A list containing more than one hundred names, among them some of the most prominent men in Shreveport, was found as a customer list on one of the local Hot Springs bootleggers. (December 1925)

There were 1,260 more violations of the liquor law in Garland County in 1925 than for any other criminal offense. Historians assert that some of the illegal moonshine was stored in underground caverns below Central Avenue, especially during the prohibition. Hot Springs Creek flows under Central Avenue, a tunnel big enough to drive a car through!

Al Capone emerged during that time for vacations and to strike deals with bootleggers to restock his clubs in Chicago. (Garland County is mountainous and remote, with pine trees to conceal the moonshine stills year round)

Liquor from the stills was shipped to Capone in Chicago via tanker rail cars. How did he protect his investment, perhaps with armed guards clinging to the sides of the trains? No. Capone had the tanker cars painted with the words "Mountain Valley Water!"

Illegal gambling and illegal alcohol in Hot Springs – both for pleasure, both bringing corruption.