Revival Comes to Sin City at the Opera House 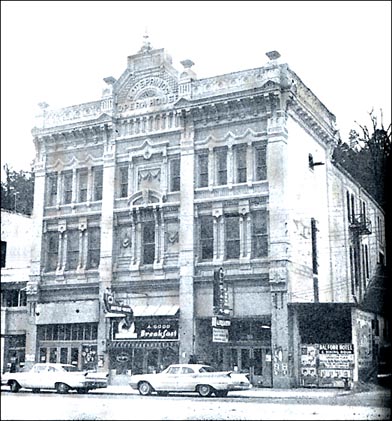 Hot Springs has a history of murderers, bank robbers, thieves, pickpockets, mob gangsters and illegal gambling. As far back as 1884, gambling had been big business in the Spa City. In the early history there was a rivalry between 2 operators - Frank Flynn, known as BOSS GAMBLER and Major S.A. Doran. Most of the downtown businesses have 2 floors – a saloon on the bottom and a gambling room upstairs.

During these 10 years of sinlessness, an amazing event happened at the Opera House in Hot Springs…. an event that would eventually affect the world. The world was at war. Liberalism was increasing its hold on the churches of the land. Religious faith was pining away.

Late in the fall of 1913, Pastor H.A. Goss of Hot Springs invited a consortium of Pentecostal ministers to come for a conference in Hot Springs. He had rented the Opera House, and the meeting was held there April 2-12, 1914. About 300 preachers and laymen from 20 states and several foreign countries met for a "general council" which birthed the Assemblies of God denomination. The Assemblies of God presently has over 12,000 churches in the U.S. and 210,435 churches and outstations in 186 other nations. The denomination boasts of 38 million members or adherents, and is the largest Pentecostal denomination in the world.

An interesting note: during the convention, practically the entire 300 participants had an impromptu parade down Central Avenue. The city of Hot Springs took little notice of the parade or the convention. The local newspapers made no mention of it, except for a very brief note in the Sentinel Record that the "Saints" were meeting, and an advertisement announcing the General Assembly of the Church of God in Christ.

The Opera House, which seated 800 people, was razed in 1961. The present-day location of the Opera House is a multi-level parking lot. The only evidence of the 1914 conference is a metal plaque in the sidewalk in front of the parking lot. Take ten years of sinlessness in Hot Springs, add the Hot Springs Opera house and 300 religious leaders = a major Christian movement to affect the world.