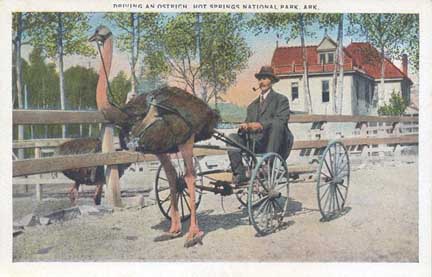 What other town in America has a history that includes using Ostriches for transportation?

Thomas Cockburn, proprietor of the Ostrich Farm, is said to have had 200 birds on his farm, with plans to increase the flock by 100 birds per year.

An adult ostrich stands 7 feet tall and weighs from 270 to 340 pounds.  The male birds could be dangerous, especially when they were nesting.  The male and female birds took turns nesting on the eggs. 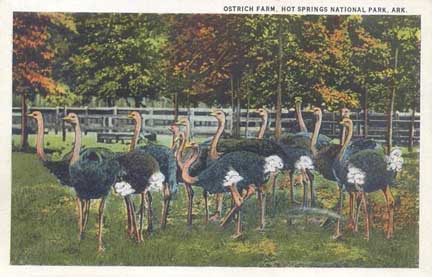 The birds could be purchased through a catalog produced by the Ostrich Farm.  The plucking of the birds also brought income to the Ostrich owners.  Their plumes were harvested for feather and down fans, pom-poms, hair ornaments, opera wraps, roll capes, carriage wraps and stoles.

This farm was in existence until the mid 1940's.  Only one other ostrich farm in America went out of business more recently than that.

Hot Springs, a town of innovative amusement, and novel industry – the African Ostrich.

*Special thanks to the Garland County Historical Society and “The Record” for information.