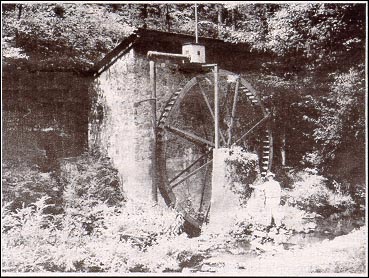 Larry Rhodes stands next to the Fordyce powerhouse

Photo and info compliments of the Senior Edition and Larry Rhodes Ask the Doctor:

Dr. Rando - "Could you tell me about The History of the big house that sits back on top of the big hill at the junction of the Gorge Road and Park Ave. Also what is the connection to the water wheel and the small lake? Was it once part of the property with the house years ago there was also a boathouse on the small lake? There is still a bridge."

The house you are talking about is the old Fordyce home. It is basically located across Park Avenue from Mickey's Barbeque, on Stone Bridge Road. Many people mistake the water wheel as a gristmill, but it was actually a water-powered generator designed and built by Colonel John R. Fordyce. (John was the son of Colonel Sam Fordyce, of the Fordyce Bath House fame). The generator was built to provide electric power to his home on the estate in 1921. The Fordyce family papers state, "John Rison Fordyce (1869-1939) was an engineer, inventor, amateur historian and archaeologist, and candidate for U.S. Congress. He was a member of Dr. Frederick A. Cook's expedition to the Arctic in 1894 and in 1917 was commissioned Major of Engineers and put in charge of the construction of Camp Pike."

The stone mill house still houses the remains of an old hydroelectric system. Water was channeled from the lake through a pipe to the water wheel. As long as there was water in the lake, there was free electricity to those who lived in the log mansion on the hill. (referred to as "the Cabin")

Local historian Larry Rhodes wrote an article about this facility for the Greater Hot Springs Senior Edition in September of 2001. Rhodes claims that the property is now owned by the National Park Service, and they have recently placed a new roof on the mill house.

The property is now known as the Ricks estate, last owned by the late Earl Ricks, a mayor of Hot Springs in the 1950's. It is listed in the Historic American Buildings Survey of the library of Congress. Their web page claims the importance of this organization - "The program documents important architectural, engineering and industrial sites throughout the United States and its territories."

On the Internet, go to

http://lcweb2.loc.gov/ammem/hhquery.html and type in the words "Ricks Estate" in the search window. There are 3 category listings, with a total of 15 pictures on the Internet. These pictures include the lake, (Ricks Pond) the stone bridge, the boathouse and the generating mill.

John Fordyce was an engineer, a leader and an inventor. His invention and home were definitely important engineering sites, - he was perhaps a southern version of Thomas Edison. This alternative source of electricity in the Spa City was ahead of its time.