Hell’s Half Acre in the Spa City 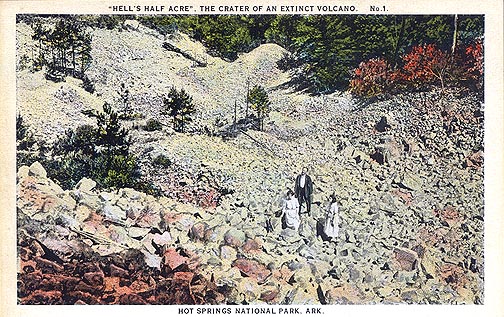 New directions to Hell's Half Acre

Arkansas Folklore and Legends: An Anthology of Tradition, by Lesley Speller states:

"Many places are said to be cursed or damned. One such place is called Hell's Half Acre. Another in the same area is an unbelievably deep hole in the earth which seems almost endless. In this one, the hole is a bottomless pit created to house a demon which is chained within it. It is said that hunters caught after dark have heard its ". . . groans of pain and shrieks of savage profanity." Naturally, the place is greatly avoided after nightfall."

So goes the legend of Hell’s Half Acre in Hot Springs. Just one quarter mile off of Mill Creek Road is a place feared by locals, and avoided by even hunting dogs. Although it is called Hell’s Half Acre, it is actually about an acre or more of huge rocks, no plants, no growth, but an utter mystery to even geologists.

Some say the Devil lives below. Some say the gully of rocks is 8,000 to 10,000 years old. Some say this is a crater of an extinct volcano. As far back as the 1870’s, Hell’s Half Acre was a public anomaly. The Victorian Inn was built nearby and tourists walked a trail to the area to see these boulders lying in a large gully.

Geologists acknowledge this as a natural formation, but deny that it was once a volcano. But what heats the thermal hot springs in the Spa City nearby?

One expert, Scott Rowland, claims, "The problem is how to get water circulating down into the region of heat, and back again. This can be accomplished with ancient fractures left over from continental collisions, failed rifts, etc. My guess is that in the Hot Springs region there is some sort of ancient fracture in the North American plate which allows for the water circulation."

Could Hell’s Half Acre hold the secrets to an area ready for an earthquake or a volcanic eruption? No one knows, except for maybe the Devil himself!

(Thanks to the Garland County Historical Society and Larry Rhodes, local historical expert)

After checking in the facts about the location of this property. I was told to go to Mill Creek Rd and turn left on Holy Spirit Loop. Go to the top of the hill next to Heaven, then follow the trail that leads down to Hell's Half Acre. This is no joke. I  don't know if the plane that took this picture crashed or had engine failure, but here is the picture that was taken over Hell's Half Acre.  Aerial Photo of Hell's Half Acre.

Hi Evan,
Just letting you know a few of us went on a weekend expedition to find hell's half acre. The directions say to take Holy Spirit Loop to Heaven, but the entire area is now private property, and there's no way to get to if from there. So, we used the city's GIS mapping server and Terraserver to find another route.

Here's what we found - If you take Gulpha, then Sleepy Valley for about 2 miles, you'll come upon a dirt road on the right. There's no name, but there's a sign for something like "Morning Star Development". You'll take the dirt road for a couple of miles. It'll take a sharp turn to the right and split to the left - keep going right. About a half mile further, the road will start to go up a steep climb to where they're building the new Belverdere water tower. At that point, the road will curve to the left as well, and go up a small hill. Turn left here and go up the hill. You'll need to stop at the first turn (a shallow, not sharp one, pretty much at the top of the hill) and get out. You're basically at the top of a mountain (Indian Mountain, I think). If you look around right there at the top after hiking into the woods a few hundred feet, you'll find several stacks of rocks. There are also several large outcroppings of rocks. From those rocks, If you go down the side of the mountain about a quarter mile and look for a break in the tree line to your left, you should have no trouble finding it. It's a pretty tough hike, especially coming back up. We took some pictures, and I'll be posting those in a day or two.

Anyway, just thought you might find the updated directions useful.